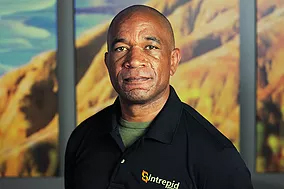 Akil Hooper has a long and storied history in the game industry. He's been a designer, a lead, a producer, and a creative director, on games such as EverQuest, EverQuest II, and Fallout: New Vegas, and companies like Sony Online Entertainment, Obsidian Entertainment, and Disney Interactive. Akil is a master at his craft, and is able to find the fun in any system he's involved with, and he'll be bringing those skills to his position at Intrepid Studios.