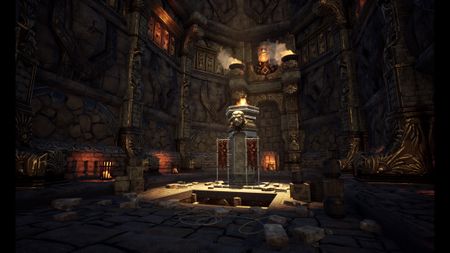 Dungeons in قلخلا دامر will range in size and will be mostly open-world.[5][6]

Half the problem won't just be solving the dungeon, it will be solving other players too.[7] – Jeffrey Bard

Dungeon difficulty will increase the further a player ventures into the dungeon.[10]

Deeper darker types of interactions will be found deeper in the dungeon.[10] – Steven Sharif 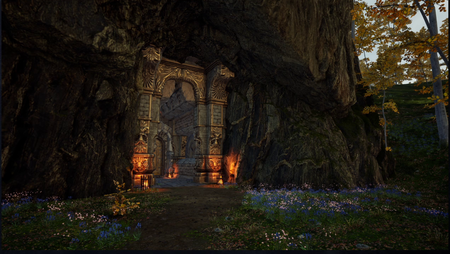 80% of the content that will exist in Ashes of Creation is open-world and there's a specific reason for that. So because of the way that friendships and or enemies are forged in the game and people have the opportunity to create their own friends or foes. We want that to play out from a contesting standpoint as well. So a lot of these hunting grounds or raid bosses that people are going to have opportunities to kill, they're going to be essentially contested potentially by your your enemies that you've created in the game or you can work together to create alliances in order to defend those contested zones.[12] – Steven Sharif

There will be open world dungeons and raids. The aspiration is to maintain the open world feel while being able to capitalize on the benefits of instanced mechanics.[13]

We're probably going to do instancing only in certain dungeons and in arenas. You probably won't see instancing too much anywhere else. What you see is gonna be what you get.[6] – Jeffrey Bard

The PvP flagging system presents an opportunity for open conflict.[14] 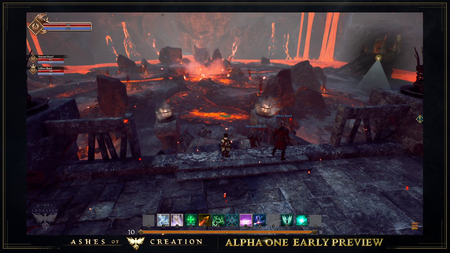 The intention is that dungeons are going to be "massive" in scale.[16]

Levels or skills will not be scaled to allow low level players to participate in dungeons with higher level players.[18]

There will be activities that are present for higher level players to mentor lower level players. Let's say you have a friend who joins later on and you still want to do things with them, there will be things to do. Will you he be able to enter a dungeon of your level and participate? No, because we don't want to inflate or deflate characters and manipulate that type of skill or power. We want that to be something that makes sense for them in a progression standpoint.[20] – Steven Sharif

The mentorship program provides individual quests that can be initiated by the mentor based off of what node that they are part of. So these are like quests that are determined by either certain buildings and or organizations or the mayor; and there are specific ones that are available for mentors to provide mentees; and they can also participate in some of those quest lines as well: Whether that be leading your mentee through a dungeon or providing a location for them to arrive with you at, or escort quests for the NPC caravans. These types of things, when done together with your mentor will provide benefits both for the mentor and the mentee as well, so you're incentivized to participate with new players.[19] – Steven Sharif

Dungeons and other points of interest are located throughout the map in-between the 103 node locations.[21]

The difficulty of PvE content, such as raids and dungeons will adapt based on the performance of the raid or group against previous bosses in that encounter.[22]

New points of interest (such as dungeons and world bosses) spawn as nodes develop.[24] This content adapts to the development of the zone it is in.[25]

Certain dungeons and other points of interest across the map will all be affected by the server’s node development. Some dungeons will only be unlocked if nodes are developed to certain stages. The storyline objectives for players inside dungeons will also be dependent on the story arc paths chosen through the node system. The drop tables in area and dungeons will also be tied into the progression of certain areas. For example, let’s say that the humans have developed a node in Region A, and a storyline has opened up that leads players to inspect the ruins (dungeon) of a nearby area. And let’s say that this node was developed in a scientific (crafting) zone… Well before the node developed, this dungeon was accessible… But now the dungeon has propagated new monster assets that include a drop table catering to a crafting emphasis because of the development of that scientific node. And perhaps, a new boss appears in different rooms of the dungeon that includes different adventure quest starts, like a mysterious item with a storyline that can only be progressed if a node develops to the metropolis stage in a certain region, across the world. Our system is so vast, when it comes to interconnectivity and how the world reacts to the players.[26]

تاراغلا will have elements that can be pre-planned.[27]

Raids will also have dynamic elements that can change from session to session.[27]

One of the design elements that we're implementing into our raids is that the raid will not be exactly the same every single time. You're going to have variables that can't necessarily be pre-planned out for. You can pre-plan out for a lot of the raid like how many DPS do you need and healers and support; where the key position and all that kind of stuff; but I think the compelling aspect of Ashes raiding will be the difficulty in achieving this content and having that content change from session to session as well. We want there to be variables that get manifested by you know what type of node got developed elsewhere. Is he going to have acolytes or cultists? What will the acolytes have skills [available] to them? What kit is the boss gonna have? What available skill repertoire will the boss be able to [wield]? ... A lot of those systems are influenced obviously by world development. So the raid kind of takes into account at what stage has the world developed: Are there two metropolises now available in the world? Okay well let's activate this skill in this skill. Now you have five metropolises, well now all these skills have been activated. Are there are they all economic nodes? Are they all military nodes? That we can change things based on that stuff. And it really is a threat assessment from the environment against the players.[27] – Steven Sharif 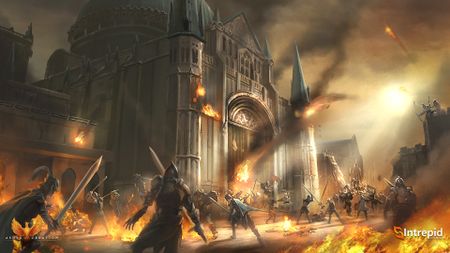 قلخلا دامر is designed for solo players as well as large and small groups.[29]

The idea behind an 8-person group is to allow us to really amplify party roles, and to create a need for each of the archetypes in every party.[30]

There will be an option in the lobby where you are capable of joining a guild based match that you can link parties together up to a maximum of twenty individuals.[37] – Steven Sharif 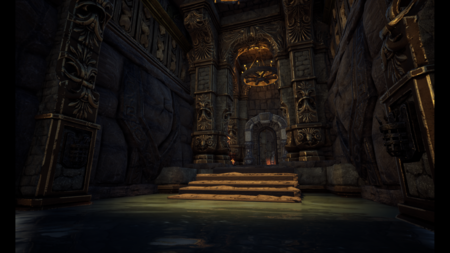 A wolf is not going to be carrying a sack of gold. It may instead drop "pelts" that can be traded for gold.[39] 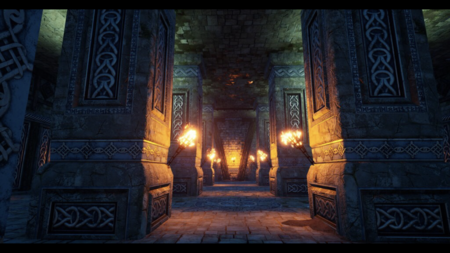 For every play, there should be a counterplay. We often see Castle Sieges turn into zerg-fests, which really doesn’t capture the epic, back-and-forth battles we wish to see in Ashes of Creation. One of our key pillars is that Choice Matters[48], and that applies to tactics and strategy as well. A well-formulated battle plan should win out over stat sheets and bodies. Zergs will generally be difficult to pull off, and will be eminently counterable through siege weapons, traps, and other battlefield tricks.[49]

Zergs are empowered by fast-travel. Meaningful travel times are intended to prevent zerg play from being so much of an influence.[50]

Encounters are designed to have meaning in terms of how boss skills and abilities relate to group compositions, tactics and strategies. Zerging is not experiencing content.[51]

We're very cognizant of the fact that we don't want to see zerging be a mechanic that's utilized by guilds to accomplish content or just to steamroll over sieges... There are specific mechanics that we are working on that will be seen through the testing phases that relate to a degree of understanding of certain systems that can't just be overrun with numbers.[52] – Steven Sharif

Mechanics that encourage political intrigue will play a role in destabilizing zergs.[53]

The best way that I found in games I played previously to take down a zerg is to cause drama from within... It's that conflict inside of the politicking that happens in that big organization. If we provide opportunities for division to occur then it also provides stability to keep a server healthy away from that zerg mentality also... If we approach the castle siege and we've destroyed the walls and we're in the throne room and we're about to cast on the penultimate thing and I at this time am just so excited from what's happening that I'm like "screw it I'm gonna go for it". It's gonna be mine. I'm gonna take the taxes for the next month. I'm gonna take all the gear from the castle. I'm gonna take everything... We kind of want that political intrigue to be present in the game.[53] – Steven Sharif

I always feel that if you balance based on groups that in your balance focus is to incorporate features that play well from a player versus player perspective as well as a player versus environment perspective: Having support classes, having DPS and tanks that can obstruct movement and/or create you know bottlenecks on the field and stuff like that. I think a well-rounded raid it will perform better against a non well-rounded raid, however then you incorporate the second aspect of numbers; and that's where again mobility, organization, leadership tactics. Having objectives in gameplay that make those important helps to balance the zerg mentality that a lot of guilds can tend to have.[54] – Steven Sharif

There will be dungeon and raid leader boards.[55] 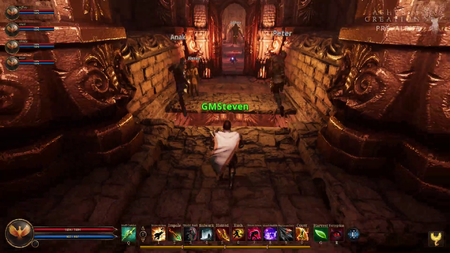 Jumping over a pit trap in Alpha-0 Dünheim dungeon.[57]

Jumping puzzles will occasionally feature in the world.[58]

Jumping mechanics are present in the Alpha-0 Dünheim dungeon.[57]

There will be global (server-wide) announcements/notifications of important events.[59]

Local node events, such as لفاوقلا will not be announced. These will rely on player word-of-mouth.[59]

Whether it be like a siege or a triggered event against a city or like a unique dungeon opportunity... those types of things are going to involve notifications. Especially to the citizens of the city; where you'll be informed of an impending event. Basically it will give you time.[60] – Steven Sharif