Battlegrounds are where pvP battles occur in the open world.[1] These are open world PvP zones that flag players as Combatants (purple).[2]

Non-combatant (green) players entering an open world battleground are automatically flagged as combatants and remain flagged for a period of time after leaving that battleground.[4]

Our castle system, our sieges against nodes, the caravan system, battlegrounds that exist, guild wars: We want there to be a meaning to this conflict. We want players to actually have some skin in the game when it comes to participating in PvP.[5] – Steven Sharif

Hunting grounds are open-world pvP corruption-enabled areas that encompass most of the map.[12]

One of the interesting components of Ashes of Creation and our flagging system is that it presents the potential for two conflicting parties to have open conflict in the open world over pretty much anything that they may want or disagree with; and if that pertains to a hunting ground, not just the caravan or the castles or the nodes or whatever, it can exist in that area.[15] – Steven Sharif

Our PvP mechanics follow a flagging system, as well as static PvP zones at certain points of interest; fight for control over cities, castles, caravans, or hunting grounds. Our PvP is designed to offer the players a well-balanced and fair world to shape through the pen, or sword should they choose.[16]

The open world pvP flagging system is designed to deter people from griefing other players.[17]

There are three levels of flagging for world PvP in قلخلا دامر.[4]

A player may not flag on members of the same party, raid, guild or alliance.[24]

Sieges, caravans and guild wars do not use the flagging system.[25]

You're not going to see griefing in the game very often; and that's because our flagging system. The corruption mechanics are based around disincentivizing a griefer or PKer but still offering the opportunity, should the occasion arise, where the benefits outweigh the risk, you have the ability to do so. If you gain corruption, which is killing a non-combatant - a player who is not fighting back basically - if you gain that corruption, your world has changed. It is not going to be a very beneficial place to be and you have the potential of losing your gear. Your combat efficacy decreases based on the amount of corruption you accrue. It is a comfortable balance between player agency and grief and basically removing player agency for other players.[26] – Steven Sharif 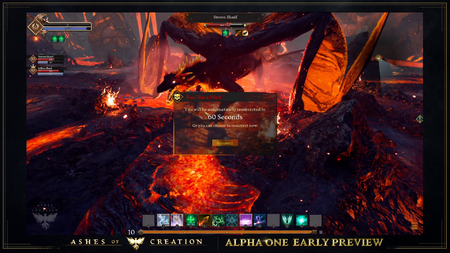 Player death in an open world dungeon in Alpha-1.[27]

We don't have deleveling, instead what we have is experience debt. Now the more experience debt you accrue, the greater the detriment to your character; not to the point where you can not get out of the debt. There will always be a way forward to remove your debt.[26] – Steven Sharif

In Apocalypse you have a scene where you have a squad in, or are solo or whatever. That scene will eventually become your house. Your freehold, exactly; and you will earn furniture to place in that freehold and you can build out your house and what-not through special achievements.[38] – Steven Sharif 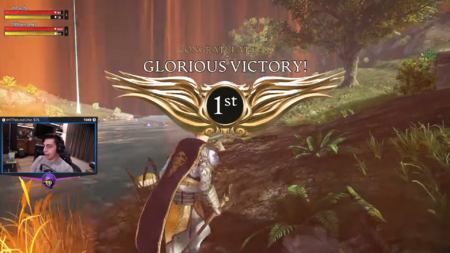 Why did we go with Battle Royale as the first testable arena mode? And the answer for that is honestly, as we're testing and getting people into matches on our servers and testing the replication among players in a battlefield; and making sure that tech is present and capable for hundreds of players on the battlefield: We wanted to have a game mode that was still fun for players to test in: An environment that was fun to test in.[40] – Steven Sharif

Ashes of Creation Apocalypse battle royale (also referred to BR mode)[41] was a Battle royale testing mode consisting of up to 100 players.[42][43]