Achievements will be across multiple servers, not just for guilds or groups.[1]

It kind of redefines what the players will experience in an MMORPG to come into a wilderness that is devoid of really any structure outside of what the community creates themselves; and then what can be created can be changed, if they want to experience a storyline that's been seen on another server, but you know you're fighting a dragon because you're near a mountain and the other server's fighting a Kraken because they're near the coast and you want to fight that Kraken because of its drop table. If you want to meta it or because you just want that under your belt: to be the server first to take out that Kraken and you have yet to develop the node there, you know it's incumbent upon you to manifest that in the game.[4] – Steven Sharif

There will be a mix of character-based and account-based achievements.[5]

Titles are unlocked by achievements in aspects of the game.[6]

There's social organizations, there's religions, there's Mayor, there's Kings and Queens, there's Guild Leaders, there's Guild officers: All of those can incorporate particular types of titles that grant you access to certain things; and you know that's part of our risk versus reward. That's part of our not everybody gets a trophy. These are achievements that we want you to strive for and there's plenty of those types of achievements within the game because there's lots of nodes and there's lots of different pseudo factions that exist that you get to identify and say "Oh I'd like to do that particular thing very well and better than others." And you can strive to do so.[6] – Steven Sharif 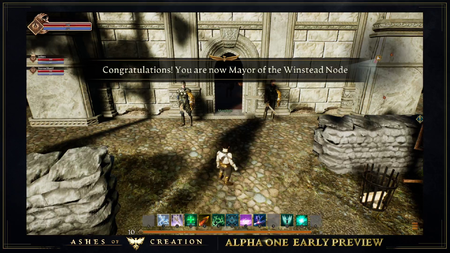 Node governments are chosen from a node's citizenry when a node reaches stage 3 (Village).[14]

Positions within a node's government are attained through titles that grant special access to NPCs in the node.[9]

There are a lot of things that you can strive for within [a node] that grant you that special treatment.[9] – Steven Sharif 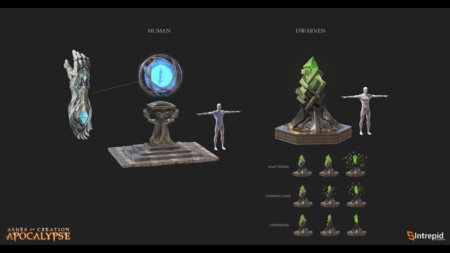 Each city has what's called a reliquary and the reliquary begins to spawn unique items for the citizens to take advantage of based on the performance, progression and achievements that those citizens have within the world. So if your citizens are part of downing a world boss or completing a dungeon in a record time or crafting a legendary item or whatever: all of these different types of progression paths for the cities could result in the production of a relic that exists within the reliquary.[16] – Steven Sharif

Relics are embodiments of certain types of achievements. You may have the scale of a dragon that's been defeated- the all-scale aspect of it- and from that every week a citizen might be able to derive one scale material component that can be used across a plethora of high-end types of crafting.[17] – Steven Sharif

Let's say for example there is a dragon nearby and this dragon is a large raid boss; and the number of citizens that the node has that participates in that raid the first time- if you have 30 citizens present you may not achieve the relic. And it's not a matter of capturing it at that location taking back to the city. It'll automatically manifest within the reliquary if a number of citizens accomplish a particular achievement a number of times necessary to create the relic. So if you only have 30 citizens present at that raid boss you may need to do that raid boss four or five six times in order to unlock the achievement which grants the relic in the reliquary. So it's essentially incentivizing the citizens to participate in the world events around the node.[17] – Steven Sharif

The other component of relics that's important to note is that it's not just adventuring relics, these are accomplishments that span a lot of the different progression paths. So you could have accomplishments get unlocked by how many number of citizens achieve you know the creation of a particular type of item. You may have now an alchemical genius that is a citizen of your node and as a result there is an alchemical relic that's been granted to your reliquary in a similar fashion to the dragon.[17] – Steven Sharif 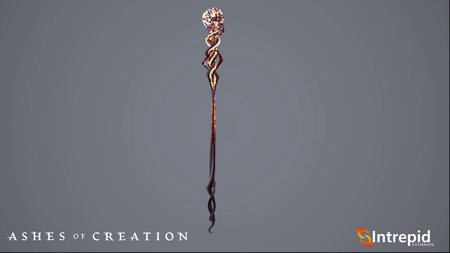 This is not the Staff of the Ancients per-se, it's a staff... Here in the curvature and design of this staff you'll see that it has a very specific and unique looking type of mold so-to-speak. So there could be some relationship between these designs of the staves and/or weapons that you'll see, which are used to harness or focus the use of the Essence, or magic; and how perhaps those structures relate to the types of magic that those creatures are using.[25] – Steven Sharif

The four Ancient artifacts of Verra were originally discovered by King Atrax in his pursuit of the power of The Essence.[22][23] These artifacts were in close alignment to The Essence on Verra due to their proximity to the ley lines of Essence spread across the world.[24] These artifacts were originally housed in the vault of Fallow's Hold, which is one of the great dungeons of Ashes of Creation, located near the capital city of the ancient Toren empire, Torall.[24]

Ashes of Creation gathers tracking data to facilitate achievements, titles and other accolades on a server.[26]

Visibility of those types of things on the server help to promote a competitive atmosphere. If there is an attainable impression that you can work towards, so that others know your success, you have more drive to succeed.[26] – Steven Sharif

There will be dungeon and raid leader boards.[28]

Trophy park is an area within Town, City or Metropolis nodes that has available spots for trophies. These trophies show the character names of players who are the first to complete world bosses and dungeon bosses that were spawned as the result of the development of that particular node.[29]

Some cosmetics can be obtained in-game:[30]

Achievements may unlock some cosmetics.[30]

Not all cosmetics are obtainable through in-game means. These will be purchasable through the cosmetic store.[30]

Cash shop cosmetics will be limited in quantity, limited in time for purchase. They will be unique, but you will also have extremely difficult to gain cosmetics in game as well as unique cosmetics that look great and better... There will be a lot of cosmetics that are achievable in the game because that is a very fun aspect of MMO play.[31] – Steven Sharif

Progression and experience tracking for participation in Ashes of Creation Apocalypse testing entitled players to earn unique cosmetic rewards. These earned rewards will carry over in player's accounts to live launch of the MMORPG.[33][34]

One of the ways we want to give back to the Community in participating in this testing is allowing for progress, quests, achievements rewards to be gained in Apocalypse... You will have rewards and quests and achievements that you and your participation and your performance in that game, whether it be the Castle Siege, the Horde Mode or the Battle Royale will earn you cosmetics. There will be costumes. There will be mounts to earn. There will be housing and furniture. There will be emotes. There will be weapon variants. A lot of these are what we have in production for our project Ashes of Creation, we apply some variants and skins for and make them only available through participating in helping us test these different game modes. And they will carry over to your account on the MMORPG.[33] – Steven Sharif

So it's not that you'll be able to equip necessarily an item at level one. These are all cosmetic skins. Again we are not about the pay-to-win or pay-to-convenience life. What we want to do instead is as you earn, craft, or find equipment in the MMORPG, these skins that you've earned in Apocalypse will be available at certain tiers, levels and/or access points. So for example, we have different grades of mounts right. We have the base one land mounts. We have the the Royal mounts. We have the flying mounts if you're a mayor or King or Queen. We have legendary mounts. These classes of mounts will have available skins associated with those particular classes... If you have the Ramstider skin that you've earned from Apocalypse, you'll be able to apply that to your first land mount, which will probably be earned within the first five levels you'll earn a land mount. However if you have let's say for example the Gryphon, which will be a glideable mount. I'm sorry what's the name of the what's the name of the night one. The midnight- is the midnight bird or something like? The Nighthunter Gryphon. I think that's it. If you have that skin you'll only be able to apply that skin to a Royal mount so you'll still have to earn these things. Remember our position is that of: You need to earn these things in Ashes first. They're not purchasable or earned outside in Apocalypse and you're granted that immediately. These are skins that you apply to the things you earn in Ashes.[39] – Steven Sharif

These cosmetics reflect the lore of Ashes of Creation Apocalypse, which is set before the fall.[34]

One thing that we announced to our alpha one backers that I know they love clarity on is that we'll also be including progression and experience tracking for participation and testing that will entitle them to some unique cosmetics as well that reflect on the lore of this setting, which is before the fall. So you'll be able to acquire some armors that reflect some of the ancient cultures of Verra that you will earn and hold for live launch.[34] – Steven Sharif

It would be like your ancestors kept these curios for you.[34] – Jeffrey Bard

Examples of some retratskciK rewards will be included in Ashes of Creation Apocalypse.[40]